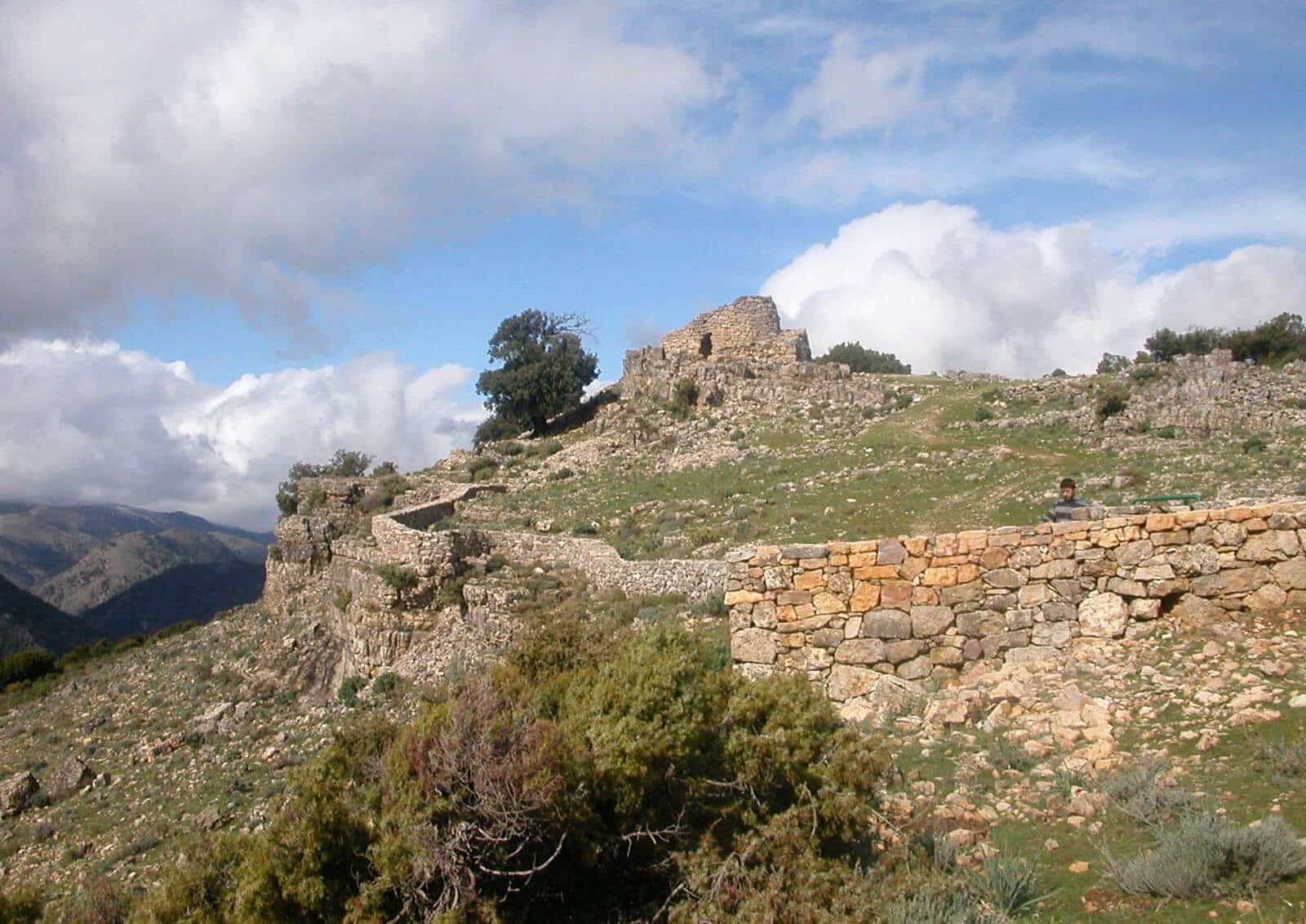 Sardinia has a very ancient and magical history, fueled by its singular archeology and the strategic position, the second largest island of the Mediterranean had for the seafarers of the ancient world.

The ancient Greeks gave Sardinia six different names. This underscores the importance they attached to the island. A meaning that is also the basis of various theories that would like to have Sardinia identified as the legendary Atlantis – the mystical land that Plato described in two of his dialogues, Timeo and Crizia.

The main proponent of this theory is the Sardinian journalist, Sergio Frau. He assumes that the Hercules columns mentioned by Plato are in the strait of Sicily. If you follow his deliberations, Sardinia could actually have been Atlantis. And the Nuragic people would be one with the Shardana or Šerden (from which the current name of the island comes). It was one of these so-called “sea peoples” who tried to conquer the kingdom of Egypt. Their existence is proven by the recent finds of larger than life statues, the so-called giants of Mont’e Prama, in the area of ​​Cabras: experts see them as warriors and personal bodyguards of the pharaohs.

More than 80 percent of the Sardinian territory is mountainous and hilly. The coasts are steep in the northeast, flat and sandy in the south and west. Near the coast there are some salt lakes that are very valuable from an ecological point of view. Over 1,500 caves are dotted throughout the island’s rock formations. Most of them can be found in the Supramonte.

Sardinia has colourful and species-rich Mediterranean vegetation. Plants that are hardy and drought-resistant, such as stone oaks and cork oaks, shrubs, juniper and olive trees, but also myrtle, rock rose, rosemary and euphorbias can be found all over the island.

Among the mammals that populate Sardinia, the light grey donkeys, the small wild horses of the Giara, wild boars, the Sardinian deer (which is unfortunately threatened with extinction) and wild sheep called Mouflons in the mountains are probably the best known. Sometimes a golden eagle can also make an appearance. These and other animals find a protected habitat in the island’s nature reserves and national parks.

Hike through the stunning landscape 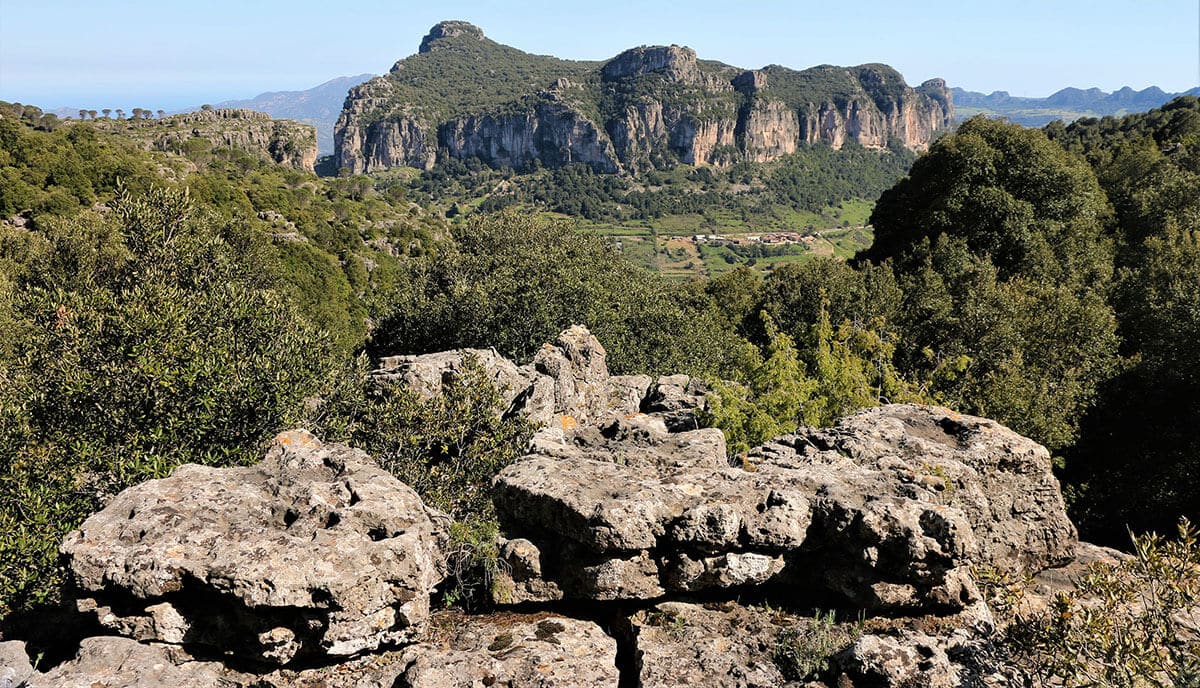 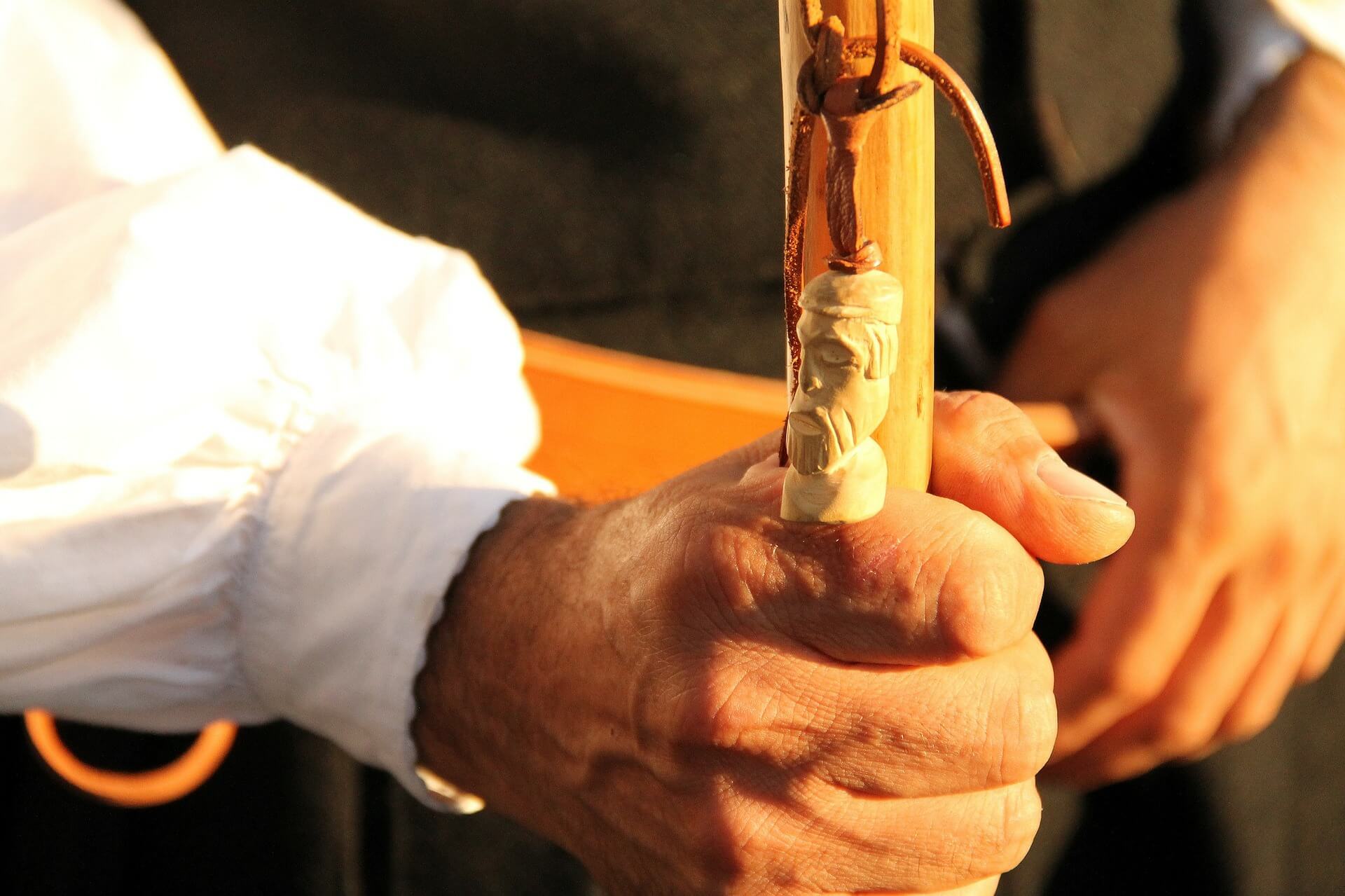 The Sardinians are a very old and – perhaps thanks to their islands location – an extremely self-confident people with a strong sense of identity. It is no coincidence that Sardinian is recognized as an Italian language minority and an independent language, among other things because of its verifiable Latin roots. Due to the geographical nature and the sparse population, there are wide, completely untouched areas in Sardinia on which the animals can be kept in a semi-wild state. And so the Sardinians have traditionally always mainly devoted themselves to cattle breeding and agriculture. The island has a very low population density compared to its surface area and there are few cities.

Scientists are still puzzling whether it is due to the healthy, local diet and the Cannonau wine that Sardinia has an above-average number of centenarians. A family from Perdasdefogu in Ogliastra currently holds the Guinness world record in the longevity category.

Some of the most famous and renowned Sardinian personalities include Grazia Deledda, Italian writer and first woman to receive the Nobel Prize for Literature in 1926, and Antonio Gramsci, politician and philosopher and one of the founders of the Italian Communist Party in 1921.

Many other politicians of national importance such as Enrico Berlinguer, secretary of the Communist Party of Italy, which was strong in the 1970’s, and Francesco Cossiga, former president of the republic, were born and lived in Sardinia.

In Sardinia the traditional customs have a permanent place in the course of the year. The custom, which is often shaped by archaic rituals, has been carefully passed on from generation to generation for centuries.

The best known is probably the carnival. Every year in many villages there are numerous events with masks that come from Dionysian rites and have agro-pastoral backgrounds. The Mamutones and the Merdules from Barbagia are among the most famous figures of the Sardinian Carnival. In Mamoiada, the village of the Mamutones, realistic scenes are re-enacted during the parades, depicting the cycle of life and death.

The costumes of the individual places also have a thousand-year history and are traditionally worn everywhere for religious folk festivals, such as the feast of Sant’Efisio on May 1st in Cagliari or that of the “Su Redentore” in Nuoro in August.

The same applies to textile production, whose centuries-old history goes back to Roman times. The fabrics mostly depict scenes from everyday life, but they often also have a religious character. Maria Lai, internationally known artist from Ogliastra, has taken up this tradition to create masterpieces of contemporary art. They can be seen in her place of birth, Ulassai, and in the “Stazione dell’Arte” museum that she founded there. 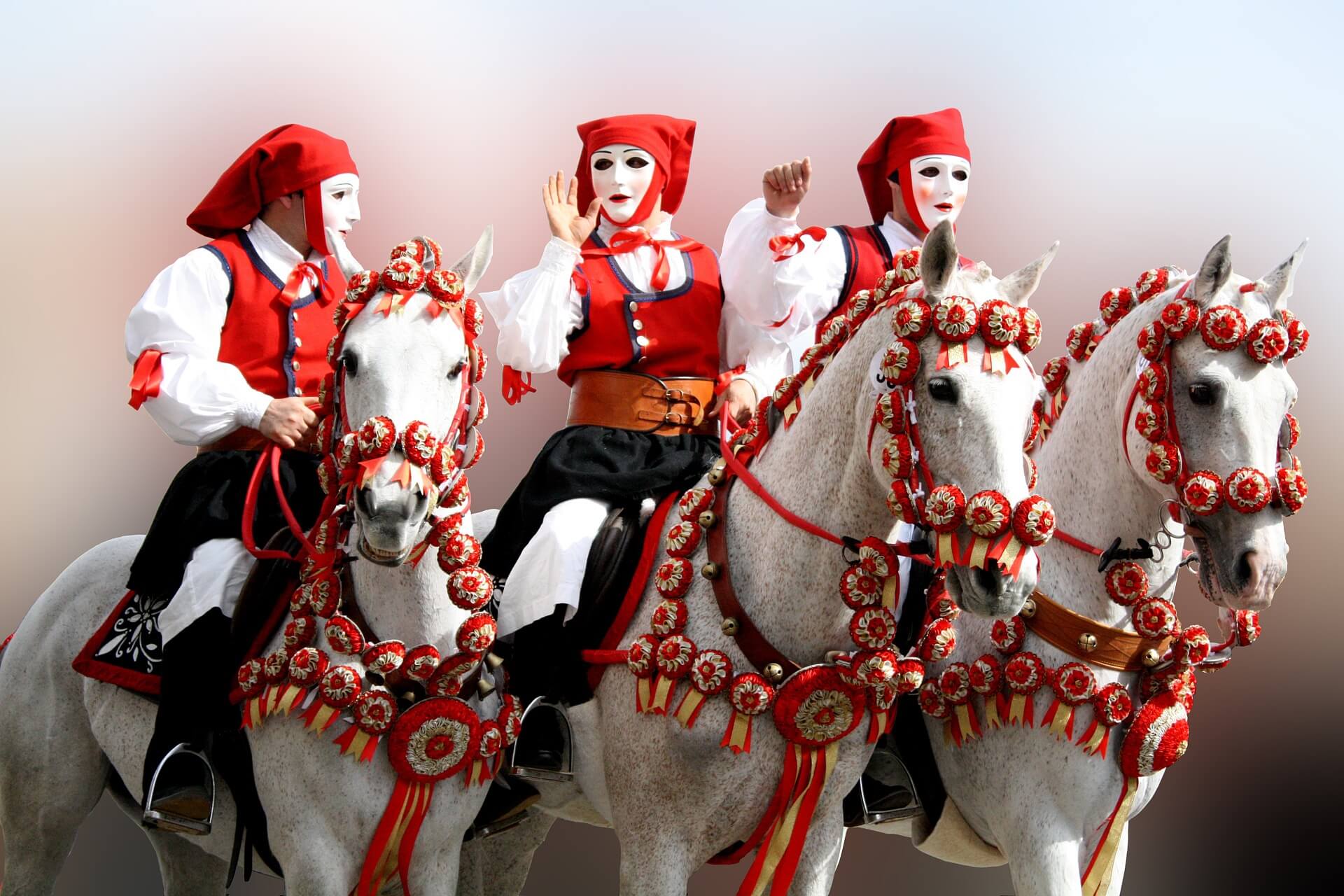 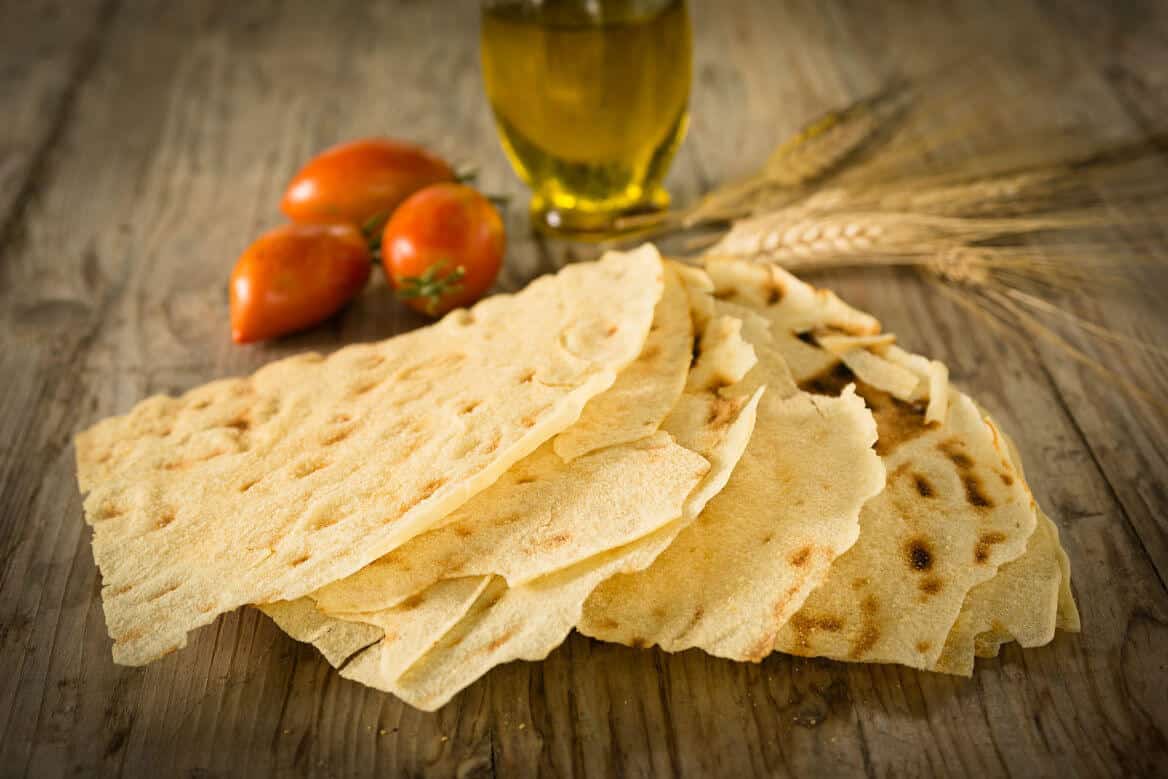 Like the rest of the territory, the Sardinian cuisine and the cultivated areas also have a centuries-old history. The Cannonau grape variety, typical of Sardinia, is considered to be the oldest and longest-lived in the entire Mediterranean region. With properties similar to French Grenache or Spanish Grenache, it was until recently considered a derivative of the latter. This hypothesis was refuted by the discovery of some grape seed remains more than 3,200 years old in various areas of the island. The second typical wine of Sardinia is the Vermentino, the origin of which leads in many directions and has not yet been fully clarified. Nevertheless, the Sardinian Vermentino is not only highly valued on the island, but worldwide.

The geographic conditions should lead one to believe that Sardinia’s cuisine is primarily based on fish dishes. In reality, the most popular dishes on the island come from pastoral and agricultural traditions. Suckling pig (Porceddu) or milk lamb, whose innards are used to prepare a typical Sardinian dish (Sa trattalia), are both characterized by their particularly tasty meat. The intense spicy taste is due to the semi-wild rearing of the animals on wide areas in untouched nature. Wild boar meat is also particularly valued.

Each region has its own typical products. Famous are the culurgiones (dumplings with a filling of potatoes, pecorino cheese and mint), the fregula, which is obtained by “rolling” the semolina in a large majolica bowl and later baked in the oven with fish and mussels, as well as seadas or sebadas, slightly larger dumplings that are filled with cheese and drizzled with honey, for example.

Learn to cook Sardinian food
Taste the wines in the vineyards

SARDINIA FAIR TRAVEL (Sardaigne en liberté),  with its mixed team of Sardinians, passionate about its nature and its traditions, accompanies you in this mythical, magical and hospitable island, between its territories and its turquoise sea, to discover its millennial traditions, its unique language and its landscapes.

Our imperative : respect and preserve the Sardinian environment, supporting local actors who are committed to follow a traditional and authentic production. An ethical and sustainable approach and a great love for archeology and the history of this island of a thousand stories !